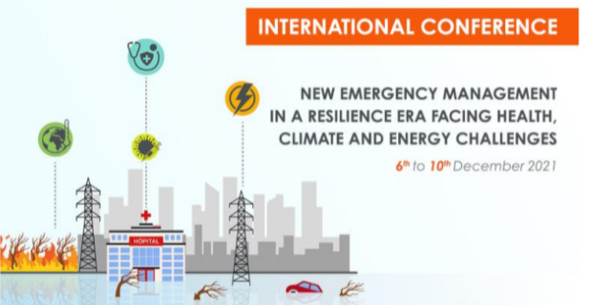 What a day! A full day (Thursday, 9 December 2021) at the TIEMS 2021 Virtual Annual Conference was allocated to IMPETUS – and aptly dubbed “IMPETUS Day”. This conference gave the IMPETUS partners an opportunity to describe how their technologies and tools can be used in the IMPETUS platform in the context of urban safety in a smart city.

This year’s TIEMS conference was on “New Emergency Management in a Resilience Era Facing Health, Climate and Energy Challenges”. The conference was co-hosted by the French High Committee for National Resilience (https://www.hcfrn.org/), the “French chapter” representative of TIEMS, with Capacity Building International (https://capacitybuildingint.com/) as the technical operator of the conference.

This conference couldn’t have been at a more appropriate time considering the long-term COVID-19 crisis sweeping the world. Emergency management personnel must prepare themselves and their local communities for the challenges, and opportunities, they may face in the future. There is a call for emergency managers to build and/or enhance new approaches, tools and capabilities to meet these challenges. Given that one of the key focus areas of IMPETUS is the management of process, ethics and technology often seen in emergency mitigation using improved security solutions, IMPETUS was a compelling and welcome addition to the conference program.

IMPETUS offers long-term social benefits in urban safety through strategic investments in technologies and processes in disaster prevention, such as physical and cyber security breaches in public spaces and city infrastructures. Furthermore, IMPETUS considers citizen preparedness, and directly involves them in smart city solutions in this era of resilience.

The IMPETUS day started with a talk from Joe Gorman (Project Coordinator, SINTEF, Norway), who introduced the project and the speakers. Matthieu Branlat (SINTEF, Norway) presented some key results from IMPETUS and Jelena Radošević (ISP, Croatia) reported some results of the IMPETUS Public Opinion Survey with respect to ethical issues regarding smart city technologies. Sandro Bologna (TIEMS, Italy) ask attendees the relevant question: “Is your Smart City a Resilient City?”, and explained how joining the COSSEC network could help you and your city become more resilient.

Nesrine Kaaniche (Telecom SudParis, France) spoke about privacy-preserving challenges in urban safety, with focus on data mining in public spaces and how privacy enhancing technologies (anti-tracking software) used in IMPETUS can enhance resilience. Martina Ragosta (SINTEF, Norway) introduced the technology validation strategies in a realistic operational environment, such as the Acceptance Pilot recently held in Oslo. Martina also spoke about how the pilot studies and IMPETUS platform users could benefit from IMPETUS tools and technologies, particularly with respect to managing physical and cyber security. Reslience in public safety in Smart Cities was given a new perspective by Osman Ibrahim (Oslo Municipality/Kommune, Norway), where he described how bridging enhanced preparedness and adaptive capacity through “training-by-gaming” can be achieved.

Radu Popescu (SIMAVI, Romania) spoke about how the integrated components of the IMPETUS platform can be consolidated and used by government agencies, civil society, emergency services and urban infrastructure for improved technical and operational alertness. The IMPETUS Social Media Threats Detection Tool, which ethically monitors online content for security in Smart Cities, was presented by Joaquin Tuells (INSIKT, Spain). The IMPETUS Weapon Detection Tool was demonstrated by Joe Levy (CINEDIT, Switzerland). Joe showed a video of a live demonstration of how the technology and its operators (1) detected the weapon (in this case a gun) in the city square, (2) alerted police and security personnel to the threat, and (3) secured the threat, preventing any harm or loss of life. The weapon detection tool was particularly exciting to see in action!

The concept of the “Attack Graph” was jointly described by Keren Saint-Hilaire (Telecom SudParis, France) and Joaquin Garcia-Alfaro (Institut Polytechnique de Paris, France) for the real-time monitoring and mitigation against cyberattacks using the fluid link between networks and vulnerabilities as a case in point. Paolo Mocellin (Università degli Studi di Padova, Italy) and his team from UPAD highlighted UPAD’s involvement in IMPETUS, and also brought the importance of “crowd science” to the fore, particularly movement of people in risk scenarios in public places.

Overall, the speakers gave excellent talks at the IMPETUS Day at the TIEMS conference. We look forward in anticipation to more results and outcomes the IMPETUS Project can produce!

More information about the event can be found here.