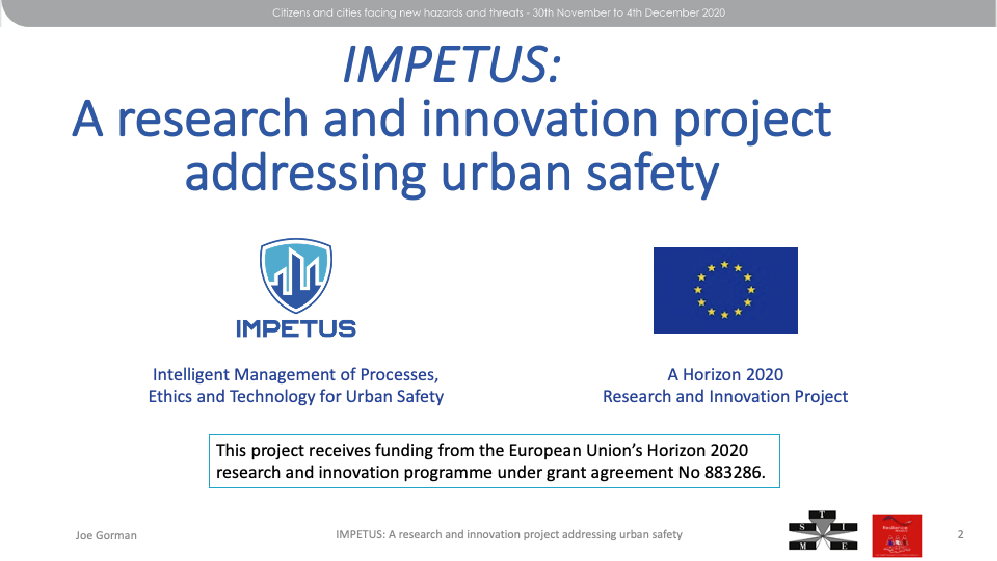 On the 3rd of December 2020, IMPETUS project leader, Joe Gorman, presented at TIEMS 2020 Annual Conference on Zoom to a virtual room of TIEMS members from across the globe. TIEMS members constitute a range of professionals from practitioners to academics.

In his talk, Joe introduced IMPETUS, further elucidating the “what, when, who, why, how, where” and the future of the IMPETUS project. He succinctly explained that the overall goal of the project was to “improve the security of public spaces in smart cities”. Joe later described that the way this was going to be achieved in the project was to follow an integrated approach covering day-to-day processes and operations, use of technologies to improve detection & mitigation of security risks, and adherence to ethical and legal standards.

Joe used a simple chart to explain the role of the Community of Safe and Secure Cities – COSSEC – for the project. He explained that, for IMPETUS to have influence beyond the project term, involvement needs to be extended beyond the sphere of the project to include stakeholders, end-users and key contributors that can provide feedback throughout the project duration. He drew on the importance of including two cities that will be pilots for the validation testing of the developed platform through three phases that include digital simulation, data collection and analysis, and exercise using simulated attacks.

But where does the project fit? IMPETUS, Joe explained, bridges the gap between what smart cities already have in place with targeted threats. The project is aimed to enhance situational awareness, city administration and decision-making, while simultaneously combatting targeted threats, such as chemical/biological attacks, physical attacks, cyber attacks and invasion of data privacy.

Joe explained that for IMPETUS to be successful, we need to identify the workspace (i.e. risks and opportunities), refine the technologies and make them available in an integrated platform. The IMPETUS platform utilises technologies that are able to predict, alert and optimise responses to imminent threats.

Joe described some of the technologies that will be used in the course of the project. These included information technology solutions such as data collection tools, machine learning, natural language processing, social network analysis and monitoring. Tools detecting and monitoring physical, biological and chemical threats were also described with respect to the sensor technologies.

Joe concluded his presentation with his long-term projection of the project’s outcome to extend the tools to smart cities, influence policy making with respect to ethical and legal standards and to make COSSEC a lasting feature of IMPETUS.

Joe’s talk was well-received by attendees, with delegates giving him high praise after the talk. Plans for multiple follow-up presentations on IMPETUS have been given the thumbs-up!

Follow us to find out when these will be happening.