The second and final live exercise in the IMPETUS project took place in Padova on 6th October 2022.  Project partners and around 30 external guests gathered in the offices of a local police station and followed the exercise via live video links to the location of the exercise itself (Piazza del Signori in central Padova) and to the SOC (Security Operations Centre) where staff were using IMPETUS tools to monitor and respond to events as they unfolded.

The IMPETUS platform allows the same dashboard view of all the tools and alerts to be shown at multiple locations, so the guests and partners could see exactly what the SOC operators were seeing at all times.

Overall, the Padova IMPETUS Live Exercise was a successful event, and (as for the Oslo LiveEx) many important lessons were learned which will be of lasting value for project participants and future users of project results.

The guests arrived in eager anticipation of what they were about to see, learn and experience from the live exercise.  Among the guests were councillors and representatives of Padova and other municipalities, officers of all the police forces and other first responders (firefighters, civil protection, etc.), as well as our COSSEC members. Moreover, since the Live Exercise has been planned as part of the evaluation process, there were operatives from different first responders (Local Police, National Police, Carabinieri, Firefighters).

Councillors and Representatives of Padova and other Municipalities, Officers of all the police forces and other first responders.

Bruno Bonomini, representing the Municipality of Padova as their project manager, introduced the councillor responsible for security, Diego Bonavina, representing the City Council and the Mayor, then the Local Police Commander, Lorenzo Fontolan. On behalf of the Municipality and its citizens, the representatives welcomed the participants involved and their enthusiasm and anticipation. They applauded initiatives such as these aimed to improve safety and security. 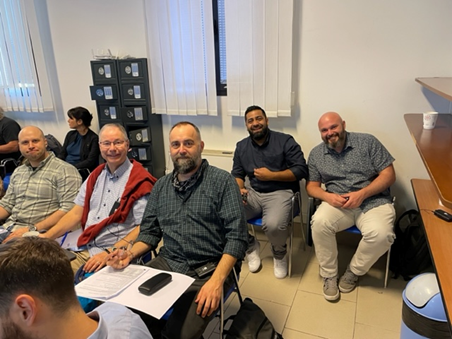 The City of Oslo IMPETUS team was present in Padova to observe and advise based on the experience gained during the Oslo Live Exercise. From the left: Magnus Borge, Willy Olsen, Juan Cabrera, Osman Ibrahim and Simon Gjetrang.

A few COSSEC members were also present at the Live Exercise to observe and provide feedback on the events of the day. 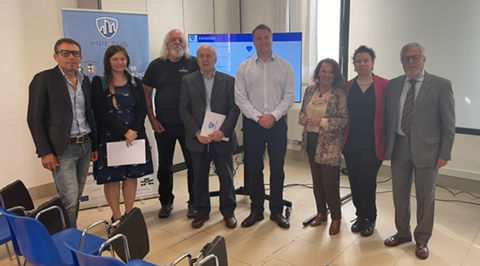 An Information Package was sent to the attendees before the event, containing an overview of the IMPETUS project, a description of the exercise scenario, the agenda for the day and brief one-page descriptions of project results. The one-pagers are available on project website at:

The day started with the Project Coordinator, Joe Gorman (SINTEF) presenting an overview of IMPETUS, the project goals and its key results. Bruno Bonomini (City of Padova Commune) explained Padova’s role in the project, introduced the context of the scenario forming the core of the live exercise and the expected outcomes; he emphasised the important role that the IMPETUS solution could have for improving a city’s resilience and safety.  The project’s Technical Manager, Matthieu Branlat, presented thereafter an overview of the exercise and what the audience could expect to observe. While noting that some of the IMPETUS tools are not designed for real-time use during an event (tools related to cyber-security and social media scanning), Matthieu explained how these had been successfully deployed the day before to detect and deal with some IT security issues, and to provide pre-warnings of the public demonstration in the square that was the focus of the live part of the exercise.

Introducing the IMPETUS Results: The Exhibition

After the general presentations, participants were invited to move to another room to tour the IMPETUS exhibition.  This consisted of separate “stations” for each IMPETUS result where project members and guests could have interactive dialogues to learn more about the results and discuss their potential application. For some results, it was also possible to view demos. External guests mingled with project members and the exhibition added a more sociable feel to the event. For the results that were later to be used in the live exercise (i.e., the integrating platform and some of the tools), this helped guests to understand the role of each in the exercise. 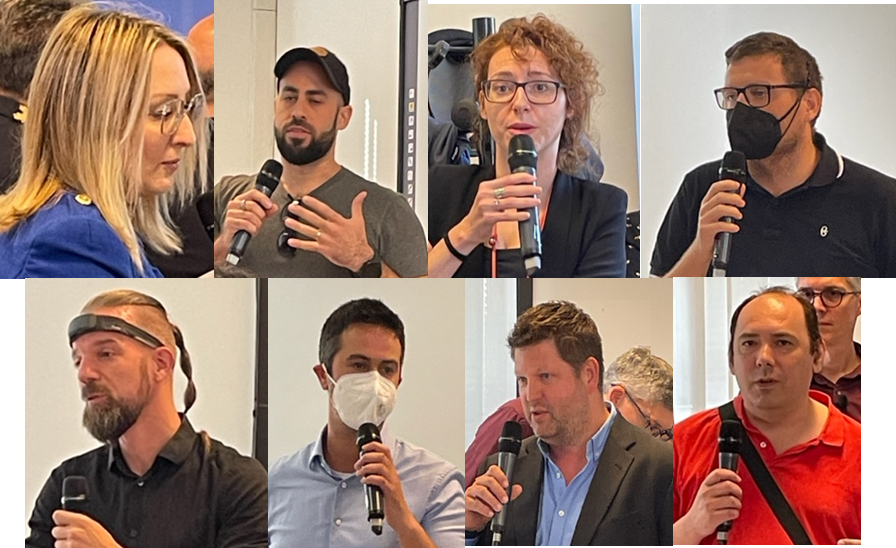 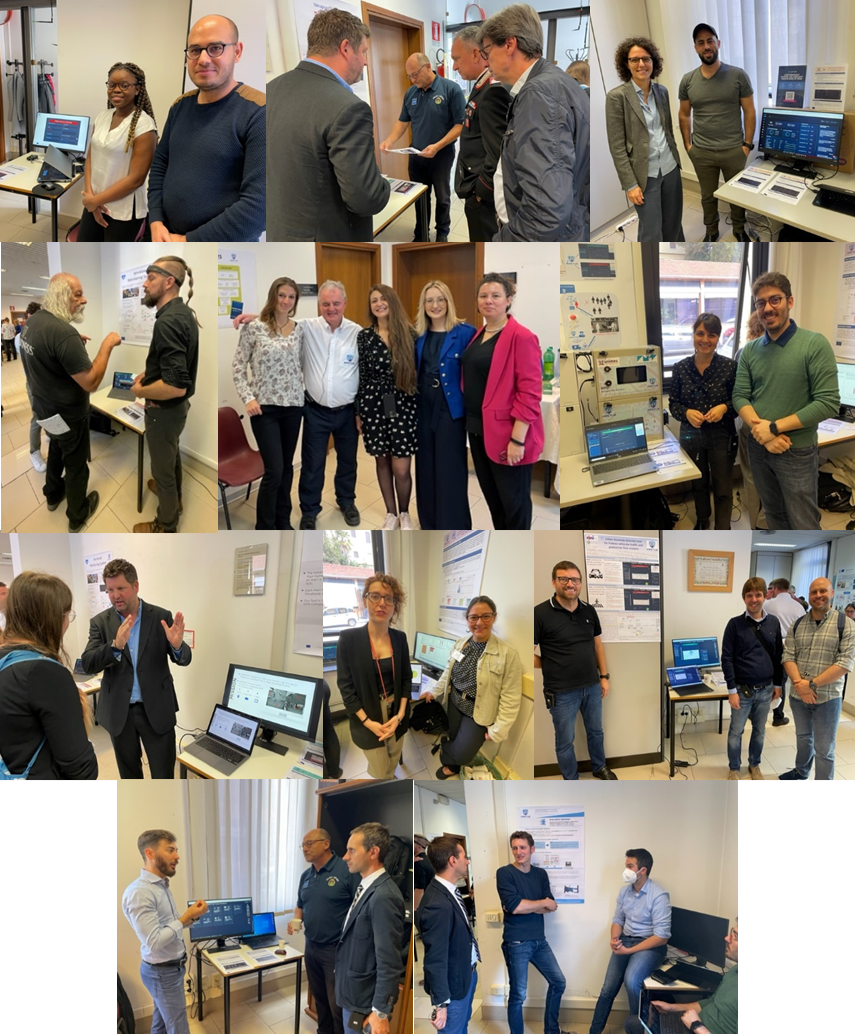 Project members and guests mingling and chatting about project results at the exhibition.

The exhibition was followed by lunch on a beautiful balcony overlooking the magnificent Prato della Valle  - Padova’s main square.  Then it was time for the live exercise!

The live exercise depicted a scenario in which criminals try to incite a terror attack in the city centre (Piazza del Signori Square) by taking advantage of an unauthorised demonstration against further COVID19 restrictions that the City Council was planning to adopt.

By means of a live video link, guests and IMPETUS members could watch events unfold in the square while safely seated at the meeting location. A second live video link allowed them to observe how the SOC (Security Operations Centre) personnel took charge of the situation in the square, and “chat” messages from an IMPETUS “reporter” at the SOC explained what was happening.  During all of this, guests could view the dashboard of the IMPETUS platform, seeing exactly the same view as the SOC staff, live, as they interacted with the platform.

Early indications of a demonstration in the square, prepared by some citizens, were detected the day before the live exercise using our sophisticated Social Media Detection tool. In addition, indications of vulnerabilities and possible attack on the city’s IT systems had been discovered by our advanced Cyber Threat Detection and Response tool.  Our Cyber Threat Intelligence tool had also uncovered - and solved – some potential threats from the dark web. These alerts to signs of unrest were closely monitored by IT specialists, and relayed to SOC personnel as alerts on the IMPETUS Platform. The SOC personnel could then notify local law enforcement so that the local police and other first responders could prepare for potential trouble the next day. 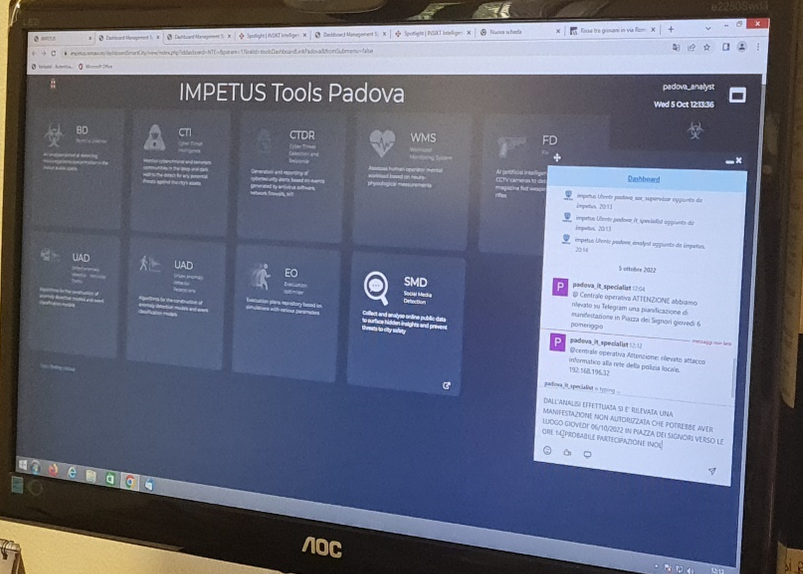 The IMPETUS Platform in operation.

As the local police were alerted to the impending threat in the square by the SOC personnel,  they raised the alert level on the day of the demonstration and prepared to manage an evacuation of a large group of people in the square using our Evacuation Optimiser tool to provide advice on optimal strategies for evacuation, based on simulations carried out before. Since multiple SOC operators see the same view of the IMPETUS Platform, and can use a messaging system to communicate with each other and forces on the ground, the potential risk can be quickly shared with all personnel involved.

While tension in the square is growing, another crisis arises when the Bacteria Detector tool raises an alert that high levels of bacteria have been detected in a municipal building in Piazza dei Signori, possibly due to a biological attack.  As personnel evacuate the building they merge with the demonstrators in the square. Panic and chaos follow, with many citizens not knowing what to do in the square, or where to go.

In the chaos, three people armed with guns prepare to shoot in the crowd! Luckily for the crowd, the IMPETUS Weapon Detection tool alerted the SOC operator to one of these guns. Seconds later, the local police and other policing units sweep in, promptly arresting the gunmen before they fire their weapons. 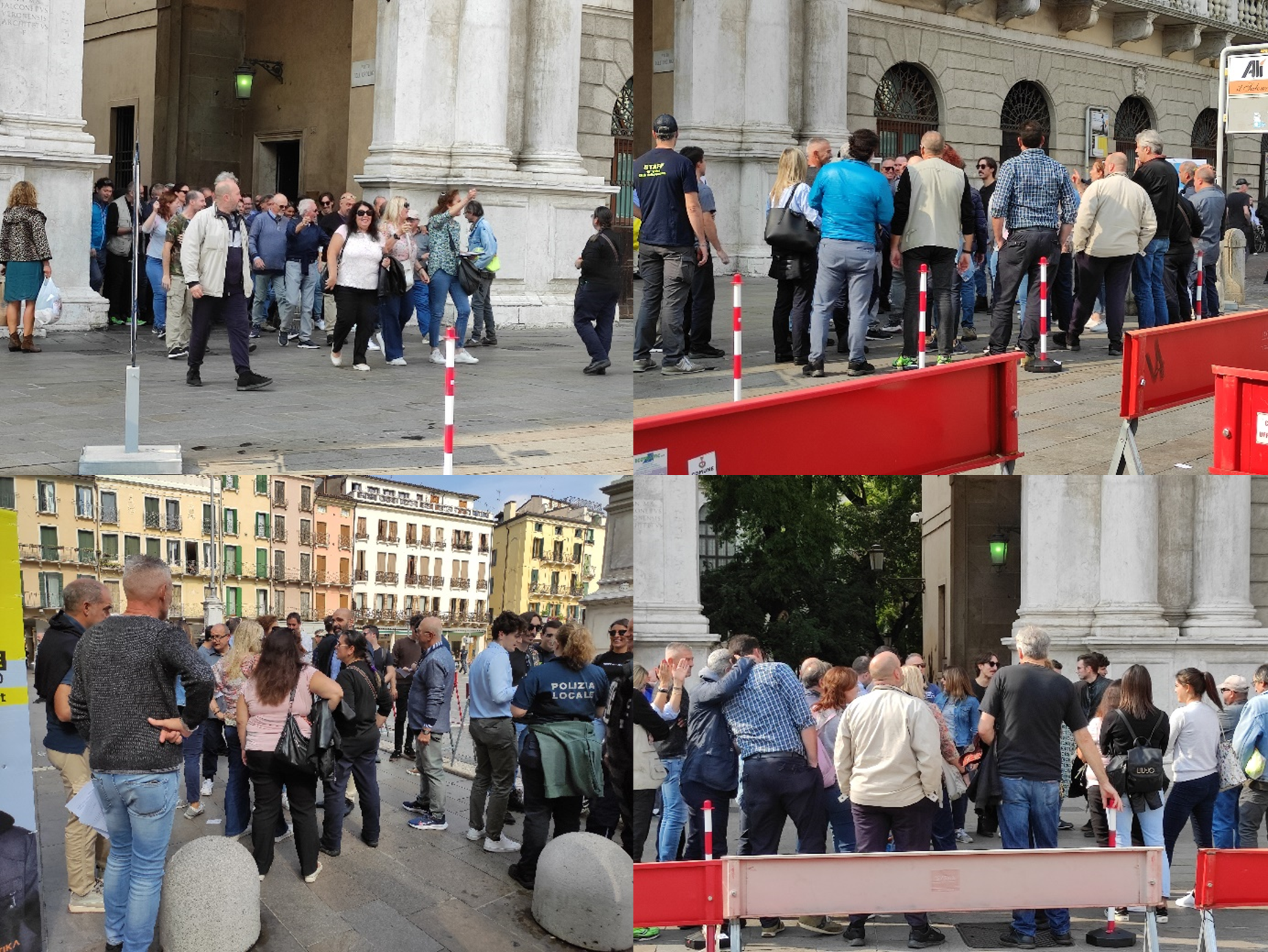 The SOC operators worked long hours over these two exciting days, which can strongly impact their physical, emotional and mental workload capacity. The Workload Monitoring System was used to monitor the operators in the SOC, allowing the SOC supervisor to be made aware of any signs of stress during the live exercise.

At the end of the exercise, the innocent citizens were safe, the unrest was controlled, the SOC personnel applauded… and the “gunmen” were caught. Calm was restored in the Piazza del Signori in central Padova.

And… at the centre of this multi-system approach to improving safety and security in these public spaces is the IMPETUS Platform.

Discussion on the Live Exercises

The Live Exercise was followed by a Q&A session.

Valuable feedback from the SOC operators was gathered about how they experienced practical use of IMPETUS, and its potential usefulness for their city. COSSEC members also gave valuable feedback.  All of this will be an important input to the structured validation activities that will now be carried out by the project team.  This will influence the strategies being developed in the consortium for the longer-term development and promotion of project results. 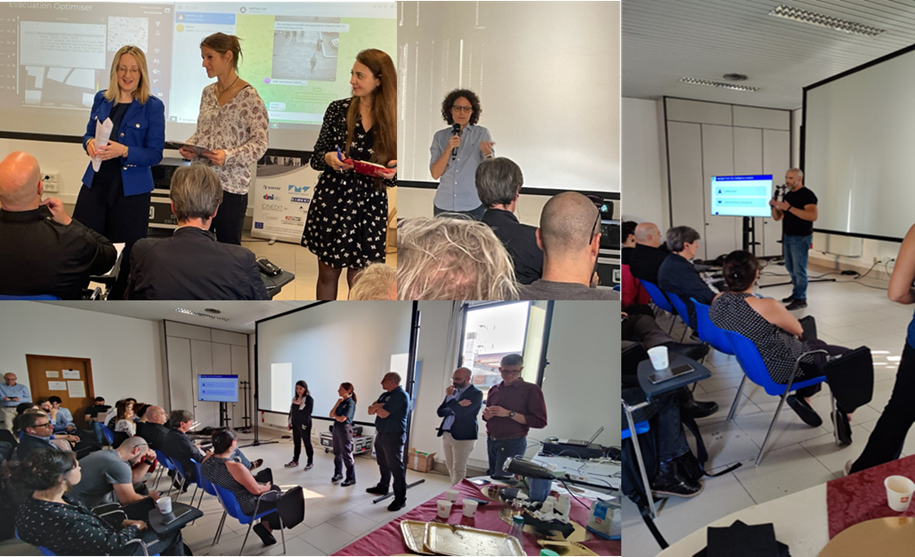 The feedback from local police and by the SOC operators was gathered by IMPETUS members.

A demonstration and exercise like the Padova IMPETUS Live Exercise is an excellent opportunity for networking and for one-on-one discussions and making professional connections. The lunch and evening dinner – with excellent Italian food! – was a great way to conclude the Padova Live Exercise. 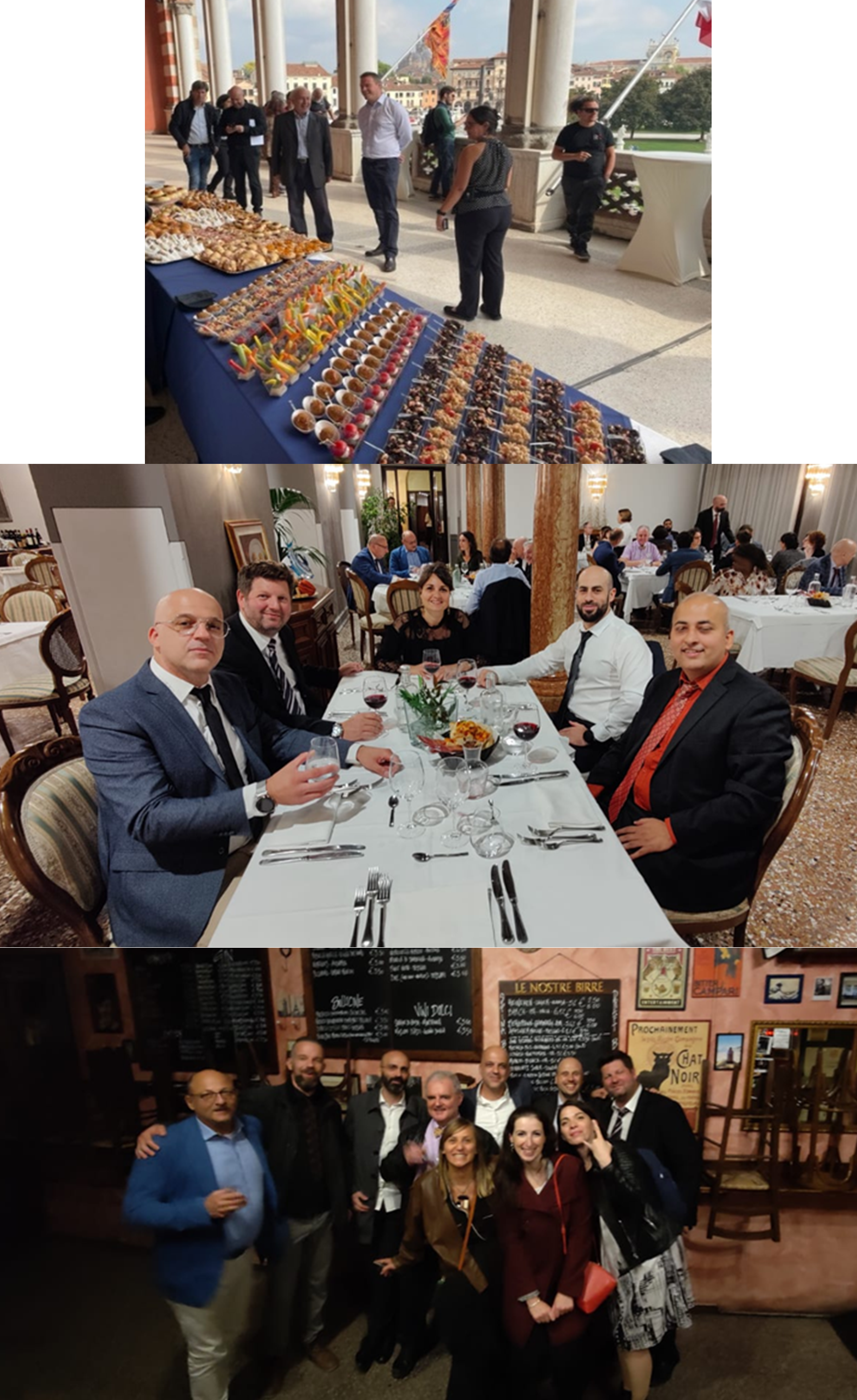 Those of the IMPETUS team who had energy left after a very exciting and busy day continued social activities late into the night.

The IMPETUS Partners Preparations and Summing Up

The following day, IMPETUS members gathered to discuss the live exercise, one-on-one demonstrations, attendee feedback, and ways to improve the use of the IMPETUS solution for the future.

The Ethics team assessing the data gathered from the Ethics survey prepared for the guests in Padova (top left), while the rest of the IMPETUS team discuss the events of the Live Exercise (middle, right and bottom).

A Word of Thanks

Thank you to everyone involved, including the IMPETUS team, the City of Padova staff and first responders, and to our very helpful external guests, whose valuable contributions made this event a success!